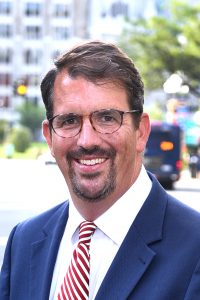 Partner Ryan T. Donovan focuses his practice on commercial disputes and personal injury litigation. Mr. Donovan has handled all aspects of civil litigation, including motion and trial practice in both New York State and federal courts. He has also successfully argued cases at the appellate level.

Mr. Donovan has extensive experience representing clients in complex commercial litigation, including dissolution of businesses, breach of contract litigation, fraud claims, employment discrimination claims and non-compete agreements. For more than 20 years He has represented both defendants and plaintiffs in complex medical malpractice and personal injury cases from inception through trial. Mr. Donovan has represented clients in administrative hearings, arbitrations and trials throughout New York State as well.

Mr. Donovan is a member of the New York State and Albany County Bar Associations and has served on the Albany Law School National Alumni Association Board of Directors since 2000. In 2009 he was appointed a Member of the Board of Trustees of Albany Law School and in 2010 was elected as President of the National Alumni Association. Since 2006, he has served as a Town Justice for the Town of Bethlehem (Population approximately 33,000).

Mr. Donovan currently lives in Delmar with his wife and three children.