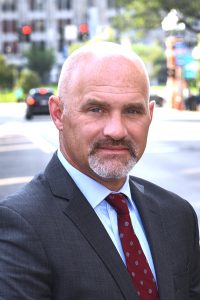 Mr. Conway has performed all phases of litigation, from case inception to trial, for many private clients who have been seriously injured. Due to his experience in handling individuals that have been exposed to legionella bacteria, Mr. Conway has also been called upon by local media outlets to comment on area Legionnaires’ Disease outbreaks.

Mr. Conway has been the Village Justice in the Village of Nassau, Rensselaer County, since 2002 and Town Justice in the Town of Nassau since 2011. He has also been appointed to sit as an Acting City Court Judge in the Cities of Troy, Albany and Rensselaer. Mr. Conway was also selected as a Mediator for the Assisted Mediation Program for the Federal District Court for the Northern District of New York.

In 2019, Mr. Conway was nominated as a Top Rated Personal Injury Attorney in Albany, NY, by Super Lawyers.

Mr. Conway and his wife, Denise, live in East Nassau, NY, with their two children.